Why do we need a Southern Ocean Observing System?

The global importance of the Southern Ocean
As a result of the unique geography of the Southern Ocean, the region has a profound influence on the global ocean circulation and the Earths climate. The Southern Ocean provides the principal connections between the Earths ocean basins, and controls the connection between the deep and upper layers of the global overturning circulation, thereby regulating the capacity of the ocean to store and transport heat, carbon and other properties that influence climate and global biogeochemical cycles.

The upwelling branch of the overturning circulation in the Southern Ocean returns carbon and nutrients to the surface layer, while the downwelling branches transport heat, carbon and other properties into the ocean interior. The balance between upwelling and release of CO2 versus uptake of carbon into the ocean interior determines the strength of the Southern Ocean sink of CO2. The Southern Ocean contributes more to the ocean storage of the excess heat and carbon added to the Earth-atmosphere system by human activities than any other latitudinal band. About 40% of the total global ocean inventory of anthropogenic carbon dioxide is found south of 30°S, whilst export of nutrients by the upper limb of the overturning circulation ultimately supports 75% of the global ocean primary production north of 30°S.

Climate and sea-level rise are influences strongly by ocean-cryosphere interactions in the Southern Ocean. Changes in sea-ice extent or volume result in changes in the Earth's albedo, water mass formation rates, and air-sea exchange of gases such as CO2, and affect oceanic organisms from microbes to whales through physiological changes and changes to their habitats. Melting of floating glacial ice by warm ocean waters influences the high-latitude freshwater budget and stratification, and may affect the stability of the Antarctic Ice Sheet and the rate at which glacial ice flows to the sea.
Given the central role that the Southern Ocean plays in the global climate system, any changes in the region will have global consequences.
The Southern Ocean is changing
Changes in the physical and biogeochemical state of the Southern Ocean are already underway. The circumpolar southern Ocean is warming more rapidly, and to greater depth, than the global ocean average. The upper layers have freshened and widespread warming of the Antarctic Bottom Water has been observed. Since 1992, the satellite altimeter record shows an overall increase in sea level, with strong regional trends. Similarly, changes in sea ice extent are showing strong regional trends, with large increases in the Ross Sea sector compared to large decreases west of the Antarctic Peninsula. The uptake of CO2 by the ocean is changing its chemical balance, increasing the acidity and reducing the concentration of carbonate ions. The response of the Southern Ocean food web to changes in ocean chemistry remains largely unknown.

The Southern Ocean food web is characterised by a keystone species, Antarctic krill, and this heavy dependence on a single species and the uniqueness of the Southern Ocean food webs and biogeochemical cycles make the system potentially vulnerable to climate variability and change. There is evidence of changes in other components of the Southern Ocean food web, from phytoplankton to penguins and seals, however lack of long-term observations makes it difficult to assess long-term trends.
The need for SOOS
The recent advances summarised above underscore the importance of the Southern Ocean in the Earth system. Improved understanding of the links between Southern Ocean processes, global climate, biogeochemical cycles and marine productivity is needed to inform an effective response to the challenges of climate change, sea-level rise, ocean acidification and the sustainable use of  marine resources. In particular, it is critical to understand how the Southern Ocean system will respond to changes  in climate and other natural and human forcing and the potential for feedbacks. To achieve this enhanced understanding, sustained multi-disciplinary observations are essential.

The Southern Ocean Observing System (SOOS) was officially launched in August 2011 with the opening of the International Project Office, hosted by the Institute for Marine and Antarctic Studies, University of Tasmania. For more information, see our Mission and Objectives.

More detailed scientific rationale and information can be found in the SOOS Initial Science and Implementation Strategy
SOOS Scientific Priorities
Based on the scientific rationale and gaps in understanding, the Southern Ocean research community has identified 6 overarching challenges (Themes). The observing system that is being designed by SOOS will ensure the data required to address these challenges is being provided to the community. 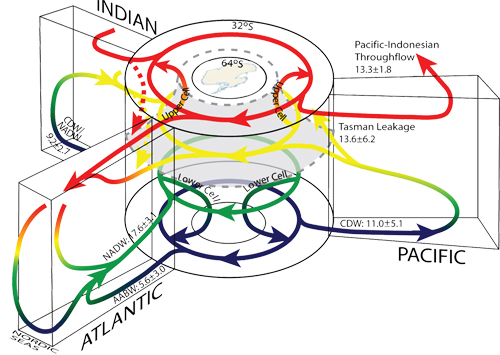